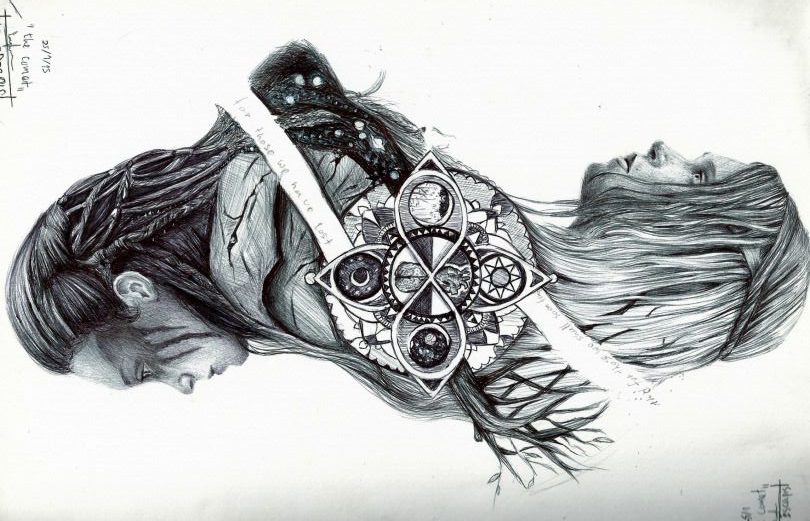 A parallel universe is a hypothetical self-contained reality coexisting with one’s own. Fantasy has long borrowed an idea of “another world” from myth, legend, and religion. Heaven, Hell, Olympus and Valhalla are all “alternative universes” different from the familiar material realm. Any book, movie or a TV show that deals with history, real-life events or is based on something created before is not just a parallel, but an alternate universe as well because it explores just one possible timeline of events and shows one point of view out of many possible.

However, a parallel universe is considered a primary source for alternate universe when it comes to fan fiction. Stories that fall into AU definition are usually “what-ifs“, where possibilities arising from circumstances which do not occur in the original fictional universe are explored.

From science fiction to science fact, there is a proposal out there that suggests that there could be other universes besides our own, where all the choices you made in this life played out in alternate realities. [space.com]

Alternate Universe artwork/fan fiction is not to be confused with parodies or satires. While they are both imitative and derivative in nature, AU images, videos, and stories do not necessarily reflect their original canons or reality but project a drastically different perspective. [knowyourmeme.com]

In alternative universe stories, characters’ known motivations may vary considerably from their decisions in the canonical universe. The author of an alternative universe story thus can use the same characters, but send them down different paths to achieve a completely different plot. Two of my all-time favorite TV shows: Legend of the Seeker and Xena: Warrior Princess had explored most of the creative options alternate universe can offer. But most of the TV shows use certain mind-fuck tools at least to some extent and fan fiction takes them to yet another level.

Alternate History – Some major event changed.
Bizarro Universe – A lot of things in that world are reversed from the usual context, good is evil or vice versa, etc.
Dark World – World’s dark, sinister, opposite.
For Want of a Nail – One small change caused a huge difference between the universes.
In Spite of a Nail – Tiny changes have made the world almost the same but the differences are critical.
Elseworld – Famous characters are placed into a situation which is potentially wildly different from the norm.
Wonderful Life – You get to see how the world would have turned out if you were never born/existed. [tvtropes.org]
Gender or body swap – characters switch bodies with each other or their looks and abilities change significantly.

And the one that I haven’t seen much in movies or any TV shows, but I mostly prefer – sexual orientation or lover swap…

While AUs exist in nearly infinite variety, a high proportion can be grouped into recognizable subtypes, with examples that can be found in a variety of fandoms. Here are some well-known and the most popular types of AU:

Some alternative timeline stories are called “fix-it fics“, because they rewrite the story so that, while the same beginning events happen, the consequences of those events are undone.

These stories take the characters from a series and place them in another time, place, or situation.

This type of alternative universe places two fictional universes in a situation where they interact. Such stories sometimes involve comparisons or conflict between the combat prowess of the two universes, often involving the various strengths and weaknesses of the technology/magic of each world. Sometimes these stories involve the substitution of characters from one universe for those of another.

Alternative universes can arise inadvertently in fanfiction when the source material is released in a serial form (such as a multi-season television series or a book trilogy) so that fan works are written before further canonical information arrives. [wikipedia.org]

This type isn’t mentioned on Wikipedia but widely used in videos and images. From dreams, visions, and hallucinations to actual cuts and edits of characters and settings, – visual manipulations are created to distort and change the action, interaction and focus point of any official releases. Series, movies, books, posters – you name it. Sometimes it’s just a parody or a satire, a small insignificant change that doesn’t have much value in itself and isn’t even considered and AU, but sometimes it goes way beyond that and tells it’s viewer something new and different. Very often it’s used as a transition between the original story and the fan fiction. By inserting something straight into the original plot the author transforms how certain things of the primary source are interpreted. It’s a major tool of recreation and enhancement. One of my favorite video editing toys as well.